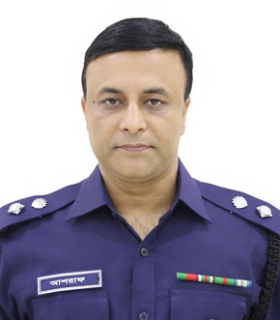 I would like to extend my heartfelt and warmest welcome to the official website of Bangladesh police, Rajshahi Range. We are dedicated to crime prevention, crime control and crime detection in bringing the offenders before judicial system. But with the advancement of ICT, crime patterns and criminal behaviors are subjected to change. Accordingly traditional policing is changing to keep peace with the criminal behavior and activity. Now a days, policing is community based, problem solving and pro active oriented. Bangladesh police is working to transform itself from a police force to a police service and in this regard implementation of the concept "digital policing" would help in meeting the objective to serve the people. It is expected that the approach of digital policing will assist to develop a new model of effective policing to pursue the criminals, protect the vulnerable and surely to reduce the rate of crimes to make Bangladesh a better and safer place to live in which is the ultimate vision of Bangladesh police. Alighning with the policy of vision 2021 and digital Bangladesh, Bangladesh police is progressively marching ahead to provide cost effective and sustainable ICT based services to the community and help to win the trust and confidence of the people. I hope this website would be able to facilitate the people to interact with the ICT based activity of the police of Rajshahi Range. I also hope and believe that this website would be able to implement the vision 2021 and the dream of digital Bangladesh.